Can “Flesh & Blood” inherit the Kingdom of God??? According to the Scriptures, “Flesh” cannot inherit the Kingdom— so it really does not matter what ethnicity or skin color one’s flesh happens to be!

“It is the spirit that quickeneth; the flesh profiteth nothing: the words that I speak unto you, they are spirit, and they are life.” (John 6:63)

“Now this I say, brethren, that flesh and blood cannot inherit the kingdom of God; neither doth corruption inherit incorruption.” (1Corinthians 15:50)

“Neither give heed to fables and endless genealogies, which minister questions, rather than godly edifying which is in faith: so do.” (1Timothy 1:4)

“But avoid foolish questions, and genealogies, and contentions, and strivings about the law; for they are unprofitable and vain.”  (Titus 3:9)

“Even the righteousness of God which is by faith of Jesus Christ unto all and upon all them that believe: for there is no difference: For all have sinned, and come short of the glory of God.” (Romans 3:22-23)

“For there is no difference between the Jew and the Greek: for the same Lord over all is rich unto all that call upon him. For whosoever shall call upon the name of the Lord shall be saved.” (Romans 10:12-13) Does the book, “Who is Israel?”  teach hatred towards Any humankind?

NO!  Absolutely not!  We desire what God desires– He is “not willing that any should perish, but that all should come to repentance.”  (2Peter 3:9)

We reject any & all racism, and we reject any & all prejudice for, or hatred against, any ethnicity. We are NOT “anti-Semitic”… However, we ARE anti-fraud, anti-lies, anti-deception, anti-unbiblical doctrine, and we are “anti-anything” that is antiChrist!  We are anti-Satan and his false religion. We are not against the Jewish people, but we are against their anti-Christ religion. We are not opposed to anyone owning their own private property, but we are opposed to the fraudulent property confiscation that is encouraged by Zionism.

We consider “Christian-Zionism” to be an oxymoron. Contrary to popular opinion, the Bible and modern Judaism do not mix. The apostle Paul (born a Jew) used to be active in the “Jews’ religion”, but he was “saved” and “born again” as a Christian. In fact, he rejected his “pedigree”, and stated that “flesh and blood cannot inherit the kingdom of God.”

Anyone who opposes our Biblical doctrine, will try to label us as being “anti-Semitic” — but, don’t you believe it! We are NOT anti-people, we are anti-false doctrine!

Yet, sadly, in today’s world– Truth is an inconvenience, while falsehoods are comfortable. “Most people don’t really want the Truth. They just want constant reassurance that what they

believe is the truth.”  – author unknown What is the “Great Commission” for every believer?

…Preaching the gospel to every creature?

…or, building a “Zionist State”?

How have Christians gotten so far off track?

Find out, in this insightful book!

There are two main motives for writing this book—

1) To clearly define who the True, Genuine “Israel” is, according to the Scriptures!

2) To clearly expose who the “Whore”; “MYSTERY, BABYLON THE GREAT, THE MOTHER OF HARLOTS AND ABOMINATIONS OF THE EARTH” actually is, according to the Scriptures! 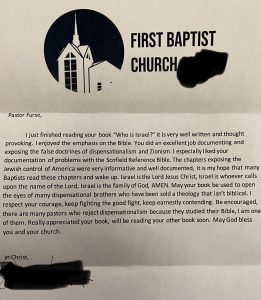 Christians in America are sincere people. They love their Bible, and their “land of the free and home of the brave”. However, most are completely unaware of the lies they’ve been led to believe. They are unaware that many of their own trusted sources of information are tainted. Christians are unaware that the majority of their trusted Bible scholars were taught by other scholars, who were taught by others—from erroneous sources. The problem goes back several decades, even more than a century. God’s people are likened to sheep, and sheep tend to follow other sheep—instead of their Shepherd! Without realizing it, we’ve trusted the theology of other sheep, rather than the simple, straightforward teaching found in the Book of the Shepherd, Himself.

…No doubt, this book will be labeled as “unscholarly”, filled with “conspiracy theories”, or maybe even “anti-Semitic”, etc., etc. However, the real reason for its criticism will be because this book exposes the fraud and faulty logic that has dominated the airwaves, and profited millions of dollars’ worth of erroneous doctrine.

“So, why is this book even necessary? It was my desire to write a book about Eschatology (the study of the end times), but it has become obvious to me that the “elephant in the room” is Israel.  Everyone needs to know what is about to happen in this world—and what a person believes about Israel will determine their view of end time events. Therefore, before I can address the subject of Eschatology, I must first address the subject— “Israel”.

Israel is the “watershed” issue.

Who is Israel?  – This book is an attempt to answer that question.

{taken from the Preface to Who is Israel?} Dispensational Eschatology is full of gaps & omissions. The “Pre-Tribulation, Secret-Rapture” cannot be defended with solid, Biblical evidence. The REAL reason for the invention & existence of Dispensational Theology is to accommodate a modern-day “Israel”.  Even the Dispensationalist, John MacArthur, admitted — “…here’s my dispensationalism, okay? I’ll give it to you in one sentence. There’s a difference between the church and Israel, period. If you understand that, you understand the essence of what I believe is a legitimate Biblical dispensationalism…”  This false doctrine exists for the sole purpose of misleading the Church into ignoring her “great commission”, as well as misleading a “Christ-rejecting, physical Israel” into her eternal damnation!

The book, “Who is Israel?”  is NOT ‘politically correct’ (meaning it does not favor Jews, nor uphold Judaism as “almost Christian”), but it also does NOT promote hate, nor is the author “anti-Semitic”. Pastor Matt Furse simply believes that the Christian’s mission is to “preach the gospel to every creature”, and that would include preaching it to both the “Jew and the Gentile”. However, nothing could be more “anti-Semitic” than telling one ethnic group of people that they are already the “chosen ones”, and that their “flesh and blood”  CAN “inherit the kingdom of God”— without Jesus Christ! (Giving them a false hope of salvation, outside of Jesus Christ).  Meanwhile, telling the other ethnic group that they cannot be the “chosen ones”, and that they are just “second class” citizens in the Middle East. This book simply explains the absolute lunacy and hypocrisy of Christians who publicly support a non-Christian religion/state (while at the same time, neglecting other ethnic groups in the Middle East), AND, it exposes the USA’s financing of ‘Israel’ (with American taxpayer’s money) to the tune of over $10 MILLION Dollars — every single day!!!

Contrary to popular opinion, God is “no respecter of persons” !

~ THIS concept is both “Biblical” and   “American“:

– American: “We hold these truths to be self-evident, that all men are created equal…” Who is Israel?  The Christian community is divided over this question. Modern Bible versions have muddied the waters. For decades, seminaries have unwittingly led their students astray. Pastors are confused. People are misguided. The end is near, and many are unprepared.

In this hard-hitting treatise Pastor Furse explains how the “theology train” got off the track, what this false doctrine is doing to our country, and what the Bible-believer needs to be prepared for in the days ahead. Eschatology cannot be rightly divided until “Israel” is properly defined.

Who is Israel? Do you know?

~ HOW did Pastor Matt Furse’s understanding of “Israel” come about?

“Years ago, my family became members of the Liberty Baptist Tabernacle in Rapid City, SD. Liberty Baptist was founded in 1980 by Pastor H. Wayne Williams. Pastor Williams holds an earned ‘doctorate degree’, yet he prefers to be called, ‘Pastor’, rather than ‘Dr. Williams’.  He was the only pastor, whom I ever sat under, that would field Bible-related questions from the congregation, ‘impromptu’.  I came to respect his wisdom and his knowledge of the Word of God.” “Soon after I had graduated from a Bible College, I moved back to the Black Hills area, and placed myself under the membership of Liberty Baptist. It was then that I learned that he was not of the popular opinion concerning eschatology, and the timing of ‘end time events’, and I became interested in what he knew. I discovered that he had written a thesis, entitled, ‘God’s Master Plan for the Ages’. For over two decades, I have meditated upon his thesis, and the Scriptures that it deals with. From this exhaustive study, comes this website, and my book, Who is Israel?.” ~ WHY is a correct understanding of “Israel” so necessary? –Because, the Word of God is the Truth, and the Final Authority, no matter what others will say. God is NOT the author of confusion. There is much error being taught and promoted in our church pulpits, today. Someone must stand in the gap, declaring, “Thus saith the LORD”.

“…yea, let God be true, but every man a liar; as it is written, That thou mightest be justified in thy sayings, and mightest overcome when thou art judged.” ~ Romans 3:4

“These were more noble than those in Thessalonica, in that they received the word with all readiness of mind, and searched the scriptures daily, whether those things were so.” ~ Acts 17:11

–Because, if one’s understanding of “Israel” is incorrect, then one’s understanding of the Word of God and the End Time Events, will also be incorrect. Eschatology cannot be rightly divided until Israel is properly defined. Instead of “blessing Israel”, many are unwittingly blessing the “anti-Israel”!  It is possible to be very sincere— and yet, sincerely wrong!  Many are being deceived by “MYSTERY, BABYLON THE GREAT”! Dispensationalism says that the tribulation is all about the Jews…. Yet, the only 2 times “Jews” is mentioned in Revelation is when God calls them the “synagogue of Satan.” Actually…  ALL who have been saved — for the last 2000+ years — are “tribulation saints”…
“These things I have spoken unto you, that in me ye might have peace. In the world ye shall have tribulation: but be of good cheer; I have overcome the world.” (John 16:33)

2 thoughts on “HOW did this Book come about & WHY is this Book important?”