Do “Judeo-Christian” values really go together?  Is “JuDeo” really Christian?

In the Summer of 2015, the US Supreme court handed down their ruling concerning “gay marriage”. Their decision broke 5-4, in favor of legalizing same-sex marriage.

However, what was NOT widely reported was this fact— Over half (13) of the 25 groups who pushed for this decision in our highest court, were Jewish! This is certainly not surprising when one considers that the amicus brief itself, was filed by the ADL ~ the Anti-Defamation League. (A pro-Zionist & anti-American organization). How many American Christians are even aware of WHO was really behind this SCOTUS decision?

Not only were Jewish lawyers heavily involved in the SCOTUS decision, but also three of the Supreme Court Justices, themselves! At least three (33%) of the nine Supreme Court Justices were Jewish (and all 3 of them voted in favor of legalizing Sodomite marriages). Two of these Jewish Justices, Ginsburg and Kagan, had already performed private same-sex weddings, even before the June 2015 ruling![1]   Was there ever any doubt which way the ruling would fall?  The “fix” was already in! Who’s in Control of Whom?  Along with Ginsburg and Kagan, Justice Stephen Breyer is also a Jew. This means that the US Supreme Court bench is 33% Jewish! (Justice Sotomayor has Jewish ties, apparently, as well — bringing it closer to 45%).

— Not a bad representation for an ethnic group that makes up only about 2% of America’s entire population! Justice Ginsburg: “I would not look to the US Constitution.”  (Click Here) Yet, when Ruth Bader Ginsburg died, many American “conservatives” (and, even “christians”) sang her praises!

And, not only all of the above, but consider also the connection between Jewish attorney Jay Sekulow and Chief Justice John Roberts. Peter Irons, a civil liberties lawyer and constitutional scholar, told the Chicago Tribune back in 2007 —

“He [Jay Sekulow] is, I think, more responsible than any other person for John Roberts being chief justice.”[2]

And so, thanks to “Judeo-Christian” Jay Sekulow, we also got Chief Justice John Roberts!

Why is this significant? Because it was “conservative” Chief Justice John Roberts that shocked us all when he voted in favor of “Obamacare”! Many Christians think that “Judeo-Christian” Jay Sekulow is their friend. But, with “friends” like these, who really needs enemies?

In view of these recent, liberal, self-destructive decisions made by these powerful Jews, can there really be anything, “Judeo-Christian”?  (Those two words don’t seem to go together!) What happened in June of 2015 shouldn’t have come as a surprise for any Christian who happened to be paying close attention to Israel. After all, just a few summers before, Tel Aviv, Israel, was voted the number #1 city in the world, by the “Gay Community”, themselves. And, in June of 2014, the US Embassy in Tel Aviv flew the rainbow colored, “gay-pride” flag, underneath the American flag!  So, should we be at all “shocked” at the outcome of the US Supreme Court’s decision, when the majority of the people in the courtroom were Jews? 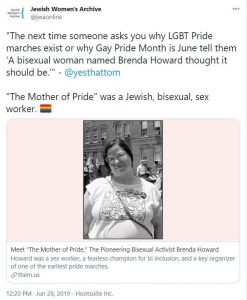 So, how well are those supposed “blessings of Abraham’s descendants” (Genesis 12:3) working out for you, now?