Are you aware of the Biblical definition of the word, “holocaust”?

Are you aware that a form of the word, “holocaust”, is found in several European Bible translations? 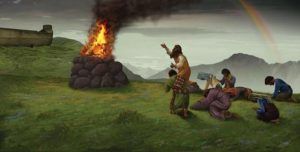 As to the Biblical “burnt offering” and the ‘law of first mention’ in the Scriptures, of the Hebrew word, ‘olah’  {Strong’s #5930} — Consider the following passages —

Genesis 8:20-21 And Noah builded an altar unto the LORD; and took of every clean beast, and of every clean fowl, and offered burnt offerings {‘olah’} on the altar. 21 And the LORD smelled a sweet savour; and the LORD said in his heart, I will not again curse the ground any more for man’s sake; for the imagination of man’s heart is evil from his youth; neither will I again smite any more every thing living, as I have done. ~ (King James Version)

Now, let’s consider the next time & place that this word is used in Scripture — see: Genesis chapter 22… 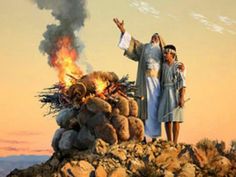 Genesis 22:8 And Abraham said, My son, God will provide himself a lamb for a burnt offering {‘olah’}: so they went both of them together. (KJV) 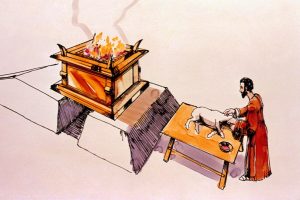 Now, we Bible-believers agree that Jesus Christ was the prophetic “provide[d] lamb for a burnt offering” (Genesis 22; Exodus 12:8-10; 1Corinthians. 5:7)… And, as we see (above) in these other translated Bibles (languages of Europe) that the “burnt offering” is translated as “holocaust”…!!!

Jesus =’burnt offering’; The Lamb of God is the “holocaust“!

Doesn’t it seem more than just a ‘coincidence’ that a certain group of people (mainly of Europe) would substitute the very term that describes the Sacrifice of the true “Lamb of God”, for their own definition of a “holocaust”?? …Satan is the master counterfeiter, and he has seen fit to remove the Biblical definition of the word “holocaust” = (the “burnt offering” of Christ) from our minds, and he has replaced it with an account that promotes guilt & sympathy for a Christ-rejecting people! 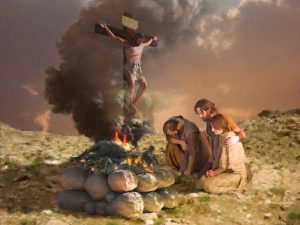 Which “holocaust” is more important? Which one has eternal ramifications?    Now, if a Christian/believer happens to believe incorrectly about some of the facts concerning a “modern day holocaust”— they will still go to heaven.  However, if one is wrong about God’s genuine “holocaust” (Jesus Christ), Who was sacrificed for all of mankind, almost 2,000 years ago, then, that person will go to an eternal hell! 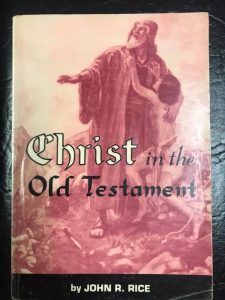 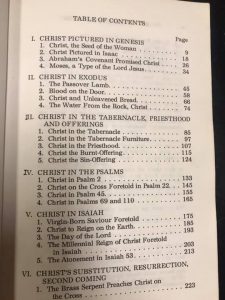 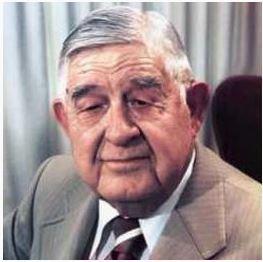 “So there was fire on the altar to burn up that sacrifice. Oh, it surely must mean Jesus bearing our sin, the torments of Hell for it, too.”

“Notice here also that all the pieces of the sacrifice were all burned up. It was not a partial sacrifice that Jesus made. That is why when the passover lamb was sacrificed, it was eaten at only one meal. If there was any left it was burned, because we take Jesus only once as Savior. Only one time we are born of God, and given a new heart and taken into the family, then we are God’s children forever. So, then, Jesus one time and forever paid this whole debt and there need be no more. So it is all burned here.” (page 122-123) 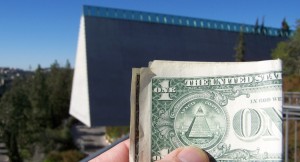 When I visited Israel in 2015, we were taken to the Yad Vashem Museum – the ‘Holocaust’ Museum, in Israel (see appendix D of my book)… This museum was obviously designed to be more than just a place to ‘remember the dead’… Its “new age” architecture is full of symbolism— Complete with a “giant altar” made of “uncut” stone, representing the “burnt offering“! (see Exodus 20:24-25; Deuteronomy 27:5-6; Joshua 8:30-31) 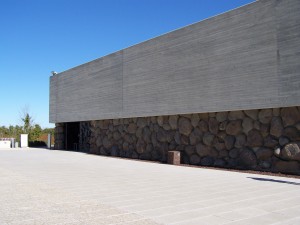 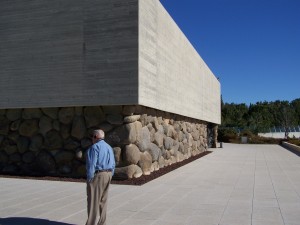 (As seen in these pictures of their “altar of burnt sacrifice”) The Zionists have literally substituted (replaced) God’s provided “holocaust”, for one of their own!  It is they who deny the “holocaust”— of Christ — our Passover Lamb! 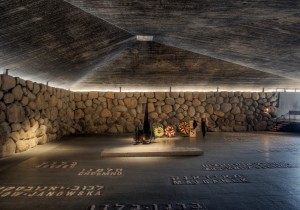 …And, so, comparatively speaking, the modern day “holocaust” is a “decoy” of Satan— when compared to the True “holocaust” of the Lamb of God, in the Scriptures! To afford the Jews their own substitution 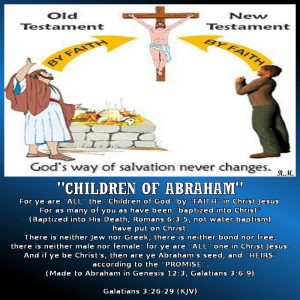 of Christ for anything else, is the worst form of “anti-Semitism” that one can commit. To appease them with any other substitute, is to damn them to hell.  I refuse to be guilty of “loving them to death”… Like all other people, they too, “must be born again” (as their first birth is NOT good enough)… Like all others, they must come to God, through Jesus Christ, alone (John 14:6).

Today, any arguments about the “holocaust” should not focus so much on the details of the “facts vs. fiction of the 1940’s”, as it should be about Satan replacing the Sacrifice (“Holocaust”= burnt offering) of the Biblical Christ of 2,000 years ago, for someone else! (And, to “replace Christ” is “antichrist“!) 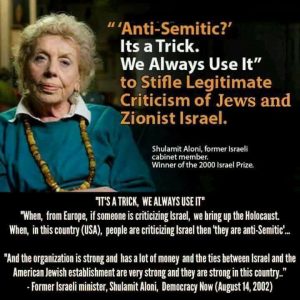 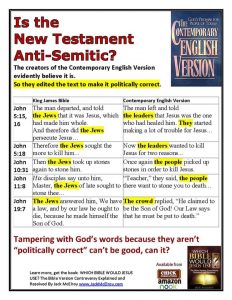